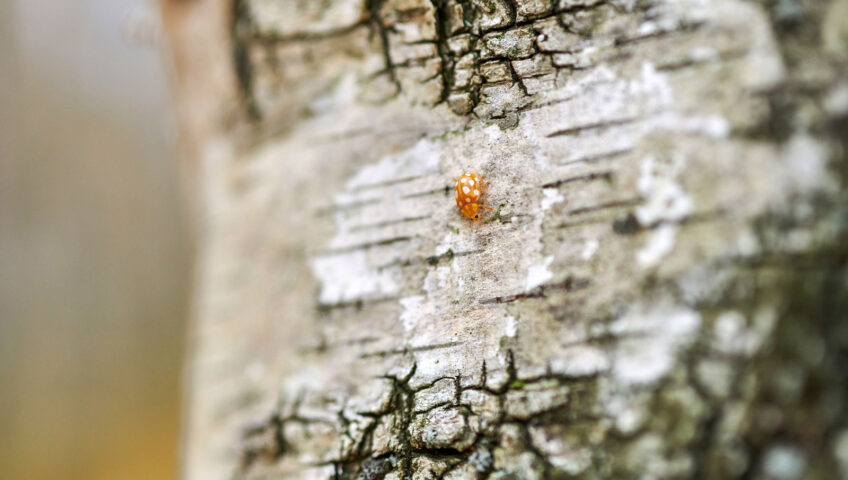 Making sure to inspect your trees and shrubs routinely for disease and insect problems is a pivotal part of maintaining their health. While you may think that you can only check for these issues during the warmer parts of the year, late winter is the ideal time to inspect for reoccurring or new issues on your dormant plants. There are a number of different concerns facing southeast Nebraska homeowners. Read on to learn about what you need to look for.

Now is a good time to check plants for evidence of Oystershell scale insects overwintering from last season. Oystershell scale can be found on many different shrubs and trees, the most common hosts for our area being lilac, cotoneaster, and dogwood, and injure plants by sucking out their sap. Scale insects can be easy to overlook because they do not look like a typical insect, and can build up to large infestations that dry out branches before they are even noticed. As adults, they become immobile by attaching themselves to twigs and growing a protective covering over themselves. To the untrained eye, oystershell scale appears to be a part of a branch.

There are two main types of oystershell scale. One type has one generation per year, and the second type has two. Identifying which your tree is afflicted with is relatively simple. If the scale on your plant is gray or banded, it will have one generation and the eggs will hatch in late May. If the scale is brown, it will have two generations, with the first hatch in late May and a second in late July or August.

In order to manage oystershell scale, timing of treatment is very important. During winter, homeowners can scrape off the scales to prevent eggs from hatching by lightly rubbing affected branches with a plastic dish scrubbing pad. It is also important to prune out and destroy heavily infested branches during this time. Once spring hits, you can spray the tree with horticultural oil to suffocate eggs and reduce hatching before the buds on the tree expand. Be sure to check the label on your oil before spraying, as some plants are sensitive to oil sprays and should not be treated.

For a few weeks after hatching, oystershell scale insects will remain in their crawler stage. During this period you can apply a labeled insecticide sprays. Insecticides labeled for control include horticultural oil, insecticidal soap, aseptate, bifenthrin or malathion. Some sprays require reapplication in 7 to 10 days, so be sure to check your label. If you expect a second generation to hatch, you can repeat the application again in August.

If your magnolia tree had scale issues last year, it’s likely that it will require further treatment this year as well. Now is a good time to inspect for signs of continuing infestation. This type of scale insect is a little different than oystershell scale, as it does not form the same hard outer shell when attaching to the tree. Instead, magnolia scale insects secrete a softer waxy substance as protection. And because they are much larger, they are also easier to identify. Right now is a great time to apply a dormant oil to affected trees, as this will help to eliminate overwintering nymphs.

From late August through the end of September crawlers will emerge, which is when you should apply a insecticidal soap or horticultural oil. Adults are largely unaffected by any treatment. For small infestations, pruning out affected branches can help remove adults before they can reproduce. Another option is to have us come and apply a soil drench insecticide which, when applied early, can help to kill crawlers.

This winter’s cold and dry conditions could have caused some desiccation injury on your evergreens. Damage occurs when evergreens lose more moisture from their needles than what can be replaced by roots from frozen or dry soil. Plant tissue dries out, resulting in brown foliage and dieback, and is usually most severe on the side of the tree that faces the wind or a source of radiated heat.

When spring does arrive, take care when going to prune damaged evergreen tissue, as they should never be pruned past where they have green leaf tissue. While needles may be brown, the buds on the branches may still be viable and eventually open. If the damage is not too severe and twigs are not killed, the area may eventually fill in on its own with proper watering and fertilization.

A fairly new invasive pest to southeast Nebraska, the brown marmorated stink bug (BMSB). A little over ½ inch in length, these bugs are shield shaped with marbled or spotted brown backs. What differentiates them from our native stink bugs is their lime green underside.

The main issue with BMSB is their frequent invasion of homes in the fall, when they are looking for places to overwinter. While they do not breed or cause structure damage, they are annoying and can cause off-putting odors in your home. If found inside, simply vacuum them up and dispose of them. Be careful to avoid putting them outside near your garden, fruit trees, or small fruit crops like grapes and raspberries. BMSB have needle-like mouths that siphon the fluids from plants, causing damage to fruits and leaves.

A new invasive species to be on the lookout for is the spotted lanternfly. While it has yet to be found in Nebraska, chances are it is only a matter of time before they are here. These insects damage host plants by feeding on sap from stems, leaves, and the trunks of trees, and pose a serious risk to grape, orchard, and logging industries. Affected trees may be found with sap weeping from the wounds caused by the insect’s feeding. The sugary excrement the spotted lanternfly leaves behind may coat the host plant, later encouraging the growth of sooty mold.  Host plants have been described as giving off a fermented odor when this insect is present. It is important to familiarize yourself with what to watch for, and report possible sightings to the Nebraska Department of Agriculture, or your local Extension office.

The spotted lanternfly is not a true fly or a moth, but instead a member of the bug family. Adults are 1 inch long and ½ inch wide. The forewing is gray with black spots of varying sizes and the wing tips have black spots outlined in gray. Hind wings have contrasting patches of red and black with a white band. The legs and head are black, and the abdomen is yellow with black bands. Adults, when startled, expose the bright red coloration on their hind wings. When adults are at rest, their gray, spotted color helps them blend in with their surroundings. Early instars (immature stages) are black with white spots. By the last immature stage, the 4th instar, they develop red patches in addition to the black color with white spots. This is the last immature stage before they mature into an adult.

Freshly laid spotted lanternfly egg masses appear as if coated with a white substance. As they age, the egg masses look as if they are coated with gray mud, which eventually takes on a dry/cracked appearance. Very old egg masses may look like rows of 30-50 brown seed-like structures aligned vertically in columns. Common locations for these eggs are Tree of Heavens, bricks, stone, lawn furniture, recreational vehicles, and other smooth surfaces. Egg masses laid on outdoor residential items such as those listed above may pose the greatest threat for spreading this insect via human aided movement.

Now if the time to inspect plants that were affected by bagworms last year. Bags can be removed until the next hatch, which happens around the middle of May. Once bags are removed, destroy the eggs by crushing them or immersing them in soapy water. As many as 500 to 1000 eggs can be contained in one bag, so removing and destroying them can help to significantly reduce this year’s bagworm population.

If you’re ever unsure about whether or not any of your plants are being affected by these issues, we are happy to come out and inspect your plants for. Simply call our office to set up an appointment that works for you.